Skip to content
As at present we cannot hold our planned programme of events, we are introducing culturalCroatia, an alternative way of exploring Croatian culture. This is a series of emails that will be sent to you from the British-Croatian Society. Each email will feature one of our members sharing an aspect of Croatian culture that is special for that person. Through culturalCroatia we hope to encourage you to delve into aspects of Croatian culture that might be new for you.
We have lined up a number of commentators for this series, but we would welcome your contributions too. The range of subjects is very broadly the arts. We are looking for no more than a few sentences explaining your choice, together with an indication how it is possible to explore the subject further, perhaps reference to a website, youtube, Amazon etc.
If you wish to contribute, or ave any questions, please email us [email protected]
culturalCroatia: #10
Heinzova
Here is a contribution from Roy Cross:
I lived in three rented rooms during my first period in Zagreb from 1979 to 1984.
My first home was in a tiny street just off Petrova, called Heinzova – named after a one-time rector of Zagreb University called Antun Heinz. I lived there for the better part of two years and on a daily basis had to explain to friends, colleagues and taxi drivers that I did not live in Heinzelova but in a tiny street they’d never heard of.
Antun Heinz 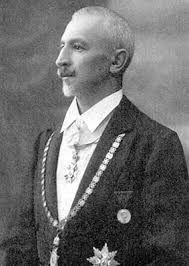 My landlady in Heinzova was a little eccentric and given to standing halfway up the stairs to peer through the fanlight above my door, to check I was behaving. One Saturday morning, earlier than I might have liked, she banged on my door and ordered me to roll up my carpet. I didn’t speak much Croatian to speak of, so couldn’t ask her why. Once we’d got the carpet into the hall, she gestured that we should take it on out into the backyard, where a thick carpet of snow had fallen overnight. I protested in vain but, short of letting go of my end of the carpet, had no choice but to follow her and the carpet out into the yard. She indicated that we should lay the carpet upside down on the snow and then passed me a carpet beater. I was appalled at the damage we were about to do the carpet and this time refused to do what I was told. She tapped her head in recognition of my stupidity and started to beat the carpet herself vigorously. She stopped abruptly and picked up the corner of the carpet where she’d been beating it, to reveal snow blackened with the gunge from my carpet. The penny dropped and I finished the task for her. I’ve spent the rest of my life waiting for an opportunity to demonstrate my knowledge of quite the best and most environmentally responsible way of cleaning a carpet – but one has never come along. When I’d finished beating hell out of my carpet on the snow in the backyard that Saturday morning, my landlady told me that I was ‘dobar kao kruh’, thereby deploying two of the very few words I knew in Croatian at that time to my complete stupefaction.
culturalCroatia: #9
Naive painting
Monday this week, the 18th May, marked what would have been the 100th birthday of one of the great masters of the Croatian Naive reverse glass painting tradition, Ivan Većenaj.
In 2011 I had the honour of visiting the Galerija Ivan Većenaj in Gola and meeting the artist. He was up late to meet our tardy tour group, yet his eyes were merry and he seemed pleased to welcome us despite the late hour.
His works hang throughout the two story building with several works, including a large tapestry rooster inspired by one of his favourite subjects, dwarfing us as we stood beneath them. I particularly remember the technically impressive detailing and fine lines of his Four Horsemen of the Apocolypse which continue to inspire me to hone my own craft - but the work that most captured my imagination and remains firmly in my heart was his Butterflies. Both works, plus many more, can be seen by visiting the online gallery link below.

Ivan Većenaj died on 13 February 2013, but his paintings will forever remain an integral part of the Croatian Naive tradition and meeting him holds a very special place in my own development as an artist working in oils on glass.
Visit Galerija Ivan Većenaj online
Find out more from the Zagreb Museum of Naive Art
Contributed to the Cultural Croatia newsletter series during lockdown by British Croatian Society member and reverse glass painter, Melanie Hodge.
mjhodgeart.co.uk
@MJHodgeArt on Facebook and Instagram
culturalCroatia: #8
Oscar Nemon
Aurelia Young writes:
At the age of 17 my father, the sculptor Oscar Nemon left his home town, Osijek, to study sculpture in Vienna before making his way to Oxford. 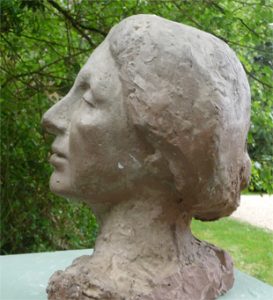 One of the works I found in my father’s studio, after his death, was the bust of an unknown woman who looked middle aged and middle European.
My father left no clue as to who she could be. I searched through his exhibition catalogues but found no clue as to her identity. Then one day I came across a press cutting about an auction of works of art to raise money for the Campaign for the Abolition of Capital punishment in 1956. One of the works to be auction was a bust of Sir Max Beerbohm by Oscar Nemon. In an interview Nemon had said that during WWII he was sent to the village of Abinger where he met and sculpted Sir Max Beerbohm and was taught English by Lady Beerbohm. Lady Beerbohm, Nemon said ‘not only took great pains about my English lessons but also cooked me nourishing meals. She refused a fee but agreed to accept a portrait bust of herself’.

I was unaware that Nemon had sculpted Lady Beerbohm; what did she look like I wondered? I discovered that Lady Beerbohm née Florence Kahn was an American actress of German Jewish descent and from a photograph I found of her in her youth I decided that the bust in Nemon’s studio must be Lady Beerbohm.
Dalibor Prančević from Split wrote an account of his visit to Nemon’s studio, near Oxford.
culturalCroatia: #7
"Daleki Accordi"
Alison Bujic writes: